The Dual Nature of Stereopsis – Part 6

It’s time to elaborate more on the dual terminologies for stereopsis. In Part 2, I mentioned the excellent chapter on Fusion and Binocularity in Borish’s Clinical Refraction by Daum and McCormack. They differentiate between fine stereopsis and coarse stereopsis. Fine stereo is what we typically test as stereoacuity, as when the patient is asked which of the Wirt Circles pops out. It is therefore considered quantitative in nature, owing to it’s comparatively central detail. It is also referred to as patent stereopsis. In contrast, coarse stereopsis is more qualitative. It is used more in the periphery, to judge stereoscopic motion. That’s one reason why patients who have poor fine stereopsis and better coarse stereopsis (such as patients with strabismus) often take the stereo test booklet and jiggle it from side to side. As Daum and McCormack note, conventional stereoscopic acuity tests likely underestimate the stereoscopic ability of many strabismic and amblyopia patients.

Consider the following, from a paper on binocular depth perception and the cerebral cortex.   The generation of a full, stereoscopic depth percept is a multi-stage process that involves both dorsal and ventral cortical pathways.  Dorsal and ventral pathways are adapted to perform different visual tasks, so it wouldn’t be surprising to find that they different types of stereo computation. Both pathways may contribute to perceptual judgements about stereo depth, depending on the task presented to the visual system. Most of our knowledge about the development of stereoscopic vision at the neuronal level has been based on events within the primary visual cortex. An important future task is to understand how developmental events in the extrastriate cortex contribute to the maturation of a fully functional system for the perception of stereoscopic depth.

Here is a nice lecture on the Neurophysiology of Binocular Vision (from NSUOK) differentiating fine and corase stereopsis. For you parvo/magno fans, the parvo-interblob pathway (that must be crowded during rush hour!) leads to the inferotemporal cortical area of the brain [IT], providing for fine stereopsis. The magno pathway leads to cortical visual area 5 [V5] also known as MT which affords coarse stereopsis. MT connects with higher-level neurons in the middle superior temporal (MST) area and parietal cortex that appear to process other motion and depth percepts such as optic flow and orienting in space. That’s why I made a fuss in Part 5 about using therapy targets such as eccentric circles in motion, while being sensitive to optic flow of background objects, and monitoring how the patient is orienting in space by localizing objects, or changing posture (sitting or standing) or balancing on a balance board while doing the stereoscopic task. 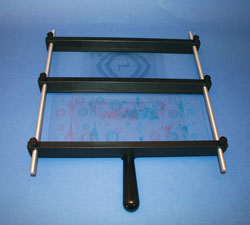 Earlier today my resident, Dr. Michelle Brennan and I were working with an adult patient who is wearing Fresnel prism on her glasses consisting of vertical and horizontal powers to achieve single vision.  She has progressed to the point of appreciating coarse stereopsis, such as the phases of the stereo slide I mentioned in Part 4.  As we tested her this afternoon all we were interested was the qualitative aspect of the first phase in which stereo disparity registered, and then a relative localization in space.  We are totally unconcerned at this juncture with the quantiative values of disparity targets in seconds of arc.  Since her primary goal is being able to drive with some sense of security in space judgment, we’ll now progress to using hand-held vectograms in space with movement, and/or overhead projection of vectograms moving the target in various arcs and planes to stimulate the dorsal/magno streams of stereomotion in the periphery. 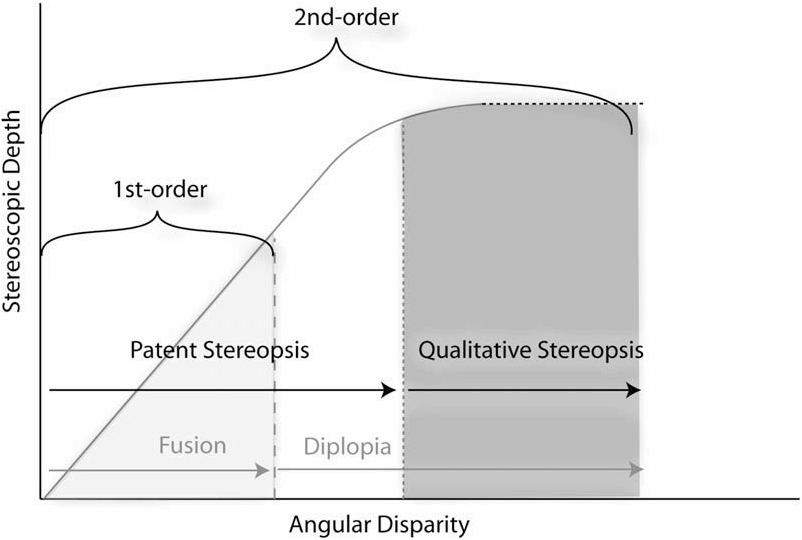 The figure above is from a paper that further illustrates the dichotomies between fine and coarse stereopsis.  Patent or qualitative stereopsis is a second order form of stereoscopic depth that may rapidly guide vergence in overcoming diplopia.  At the very least, the coarse stereoscopic mechanism can serve as a ‘back-up’ system to our fine or high-resolution system.  The utility of a coarse back-up mechanism is even more apparent in strabismus. The misalignment of one eye disrupts the precise registration of images in the two eyes necessary for fine stereopsis. However, in cases where the amount of strabismus is small, it is possible that the coarse stereoscopic system is available to provide residual binocular depth information.

Support for this viewpoint comes from none other than Bela Julesz.  Ironically, it was his work on random dot stereograms in the late 1950s, first published in book form in 1971 that gave birth to the use of RDS testing clinically.  I say “ironic” because way too much emphasis is still being placed clinically on the patient perceiving RDS booklet target shapes, or the RDE, as an idealized form of stereopsis.  It is an artificially constrained form of bifoveal stereoscopic acuity, its measurement as useful to binocular function in real space as visual acuity is useful to driving.

A week before he died at the end of 2003, Julesz wrote a Preface to what would become the 2006 edition of his classic text.  He writes something that has great bearing on what we discussed about the speed of stereoscopic responses in Part 3.  “I incorrectly stated that the time the fused images emerge depends on the complexity of the portrayed form.  As a matter of fact, the most complex shape can be fused within a few seconds if it falls within Panum’s fusional area while the simplest shape, say, a flat square can take a long time if it falls outside Panum’s area.  Only if the observer unconsciously brings parts of the square into Panum’s area by vergence movements will fusion take place.  After repeated trials, the correct vergence movement of the eyes can be learned and fusion time will be greatly reduced.

Once again, evidence that vision is a learned process, and an essential part of that process is the dual nature of stereopsis serving as the compass for binocular vision.