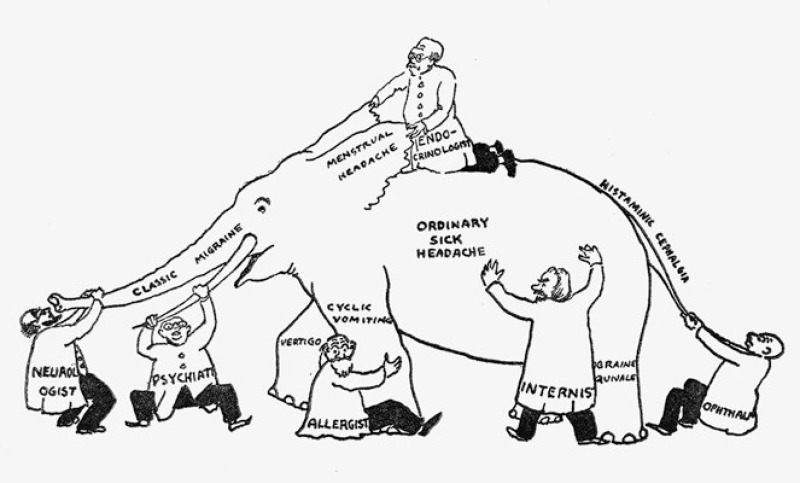 The graphic above is titled “Ordinary Sick Headaches”, and is appears in John R. Graham’s Treatment of Migraine, originally published in 1956.  Its intent is to depict medical specialists each approaching the broad problem of migraine from their isolated vantage points of Neurology, Psychiatry, Allergy, Endocrinology, Internal Medicine,and Ophthalmology respectively.  The six men are patterned after the famous Indian fable, Blind Men and the Elephant.  As related through the site, All About Philosophy, here is John Godfrey Saxe’s 19th century version of Blind Men and the Elephant:

It was six men of Indostan,
To learning much inclined,
Who went to see the Elephant
(Though all of them were blind),
That each by observation
Might satisfy his mind.

The First approach’d the Elephant,
And happening to fall
Against his broad and sturdy side,
At once began to bawl:
“God bless me! but the Elephant
Is very like a wall!”

The Second, feeling of the tusk,
Cried, -“Ho! what have we here
So very round and smooth and sharp?
To me ’tis mighty clear,
This wonder of an Elephant
Is very like a spear!”

The Third approach’d the animal,
And happening to take
The squirming trunk within his hands,
Thus boldly up and spake:
“I see,” -quoth he- “the Elephant
Is very like a snake!”

The Fourth reached out an eager hand,
And felt about the knee:
“What most this wondrous beast is like
Is mighty plain,” -quoth he,-
“‘Tis clear enough the Elephant
Is very like a tree!”

The Fifth, who chanced to touch the ear,
Said- “E’en the blindest man
Can tell what this resembles most;
Deny the fact who can,
This marvel of an Elephant
Is very like a fan!”

The Sixth no sooner had begun
About the beast to grope,
Then, seizing on the swinging tail
That fell within his scope,
“I see,” -quoth he,- “the Elephant
Is very like a rope!”
And so these men of Indostan
Disputed loud and long,
Each in his own opinion
Exceeding stiff and strong,
Though each was partly in the right,
And all were in the wrong!

I came across Graham’s graphic in a delightful book on Migraine that I had set aside to read on rainy day, of which there have been plenty this April and May.   A social and medical historian, Katherine Foxhall has done a marvelous job chronicling how our concepts of migraine have evolved through time.  Whether you are a migraineur, a subset of those who experience visual auras without associated headache, or a practitioner intrigued by patients on the headache spectrum, Ms. Foxhall’s treatment of the subject will both inform and entertain you.  Perhaps “entertain” isn’t the right word, but it’s a good segue to the book’s pre-Introduction which is a Note on Terminology and Names:

“If we are to avoid undermining, belittling, or stigmatizing migraine and the people affected by it, then the words we choose matter.  Throughout this book, many of the words I use reflect historical ideas about migraine, but, as accepted conventions for the appropriate terms are constantly in flux, it is important to be clear about the rationale I have followed when selecting my terminology.  Since 2016, the American Headache Society has accepted and described migraine as a ‘neurological disease’ … The authors of historical sources often talked of migraine as a disease, while I use the term ‘syndrome’ and ‘illness’ when historically appropriate.  In particular, I understand illness as denoting the presence of a subjective sense of unwellness, to differentiate it from the notion of disease as an underlying condition that may not manifest in tangible symptoms.”

The image above is of a scintillating scotoma, the aura that can accompany migraine or exist independent of it.  It is one of a number of representative entries into an art competition chronicled by Ms. Foxhall.  When patients describe how their aura appears, it is helpful sometimes to show them a drawing or at least to describe it so they know there is common ground.  One of the key statistics presented in Migraine: A History, is that women account for two-thirds of the people with migraine.  The condition is not only more common, but reportedly less visual and more painful for women.  The pain is believed to emanate from the C1-C2-C3 areas of the upper spine and base of the neck. 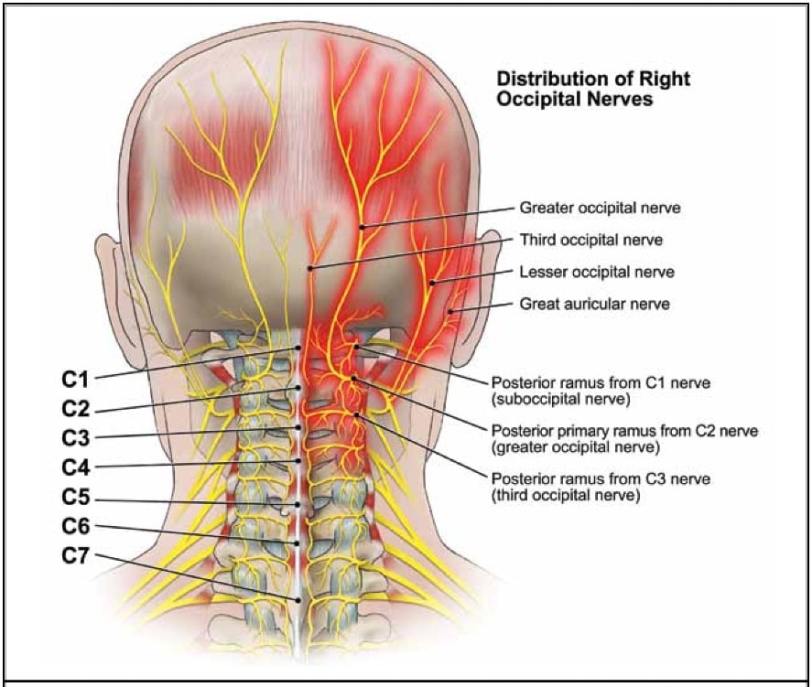 Somewhat paradoxically, occipital nerve stimulation or neuromodulation may help relieve the pain from chronic migraine whereas occipital nerve block is sometimes necessary to reduce the pain from occipital neuralgia.  Although there is palliative treatment available for pain, treatment of visual aura is more along the lines of reassurance or avoiding triggers.  Anecdotally the similarity in time course between the building up and dissipation of tinnitus, and that of a visual aura, points more toward common neurological pathways that may be indicative of sensory overload in some cases, and of perceptual filling-in due to neurosensory visual or hearing loss in others.

One thought on “Migraine: A History”