Imagine the excitement of a Super Bowl, but you’re watching a team of student athletes compete with Robots! Even more impressive, what if one special team set their aspirations to be not only champions in robotics, but to be champions for a serious public health awareness initiative for a vision problem that affects over 20 million people in the US alone! The CW Tech Robotarians Team # 2959 of Southwest Michigan is that special FIRST Robotics Team and Convergence Insufficiency Awareness is their chosen public awareness mission!

The  CW Tech Robotarians have been modeling the Vision of Dean Kamen who founded  FIRST (For Inspiration and Recognition of Science and Technology) to inspire young people’s interest and participation in science and technology. As stated by Kamen, “FIRST is more than robots. The robots are a vehicle for students to learn important life skills.”

This one minute video shows a glimpse of what FIRST Robotics Competition is all about:

So, why did the CW Tech Robotarians choose Convergence Insufficiency as their public health awareness initiative?

It just so happened that one of their very own CW Tech Robotarians, Vince suffered from Convergence Insufficiency. At age 18, Vince had endured headaches and double vision when reading ever since he was in 5th grade. He had annual eye examinations, but somehow his doctors missed checking Vince’s binocular vision which was the source of his problems. Vince is a very smart young man which made it so perplexing to figure out why he struggled in reading and school. His parents tried to help with anything they could think of, including educational support and private tutoring,  but Vince still struggled. As his parents described, it was just exhausting for Vince as it took an emotional toll on him (and his parents) watching him work so hard and fighting off the frustration. Finally, through social media, they learned about children and adults who had similar issues in reading and school and the possible connection with a binocular vision problem and reached out to our office.

Last week, after 4 months of vision therapy, Vince successfully completed his treatment and “graduated”. His headaches and double vision are gone. He is able to excel where he struggled in school and homework is no longer a battle. In addition, Vince is exhibiting a confidence that was missing before he had treatment. But, what makes this especially impressive is that Vince’s story inspired camaraderie and support among his team of Robotarians to make this year their campaign to bring awareness for Convergence Insufficiency to the schools, public officials and community leaders.

Here is the brochure they developed: 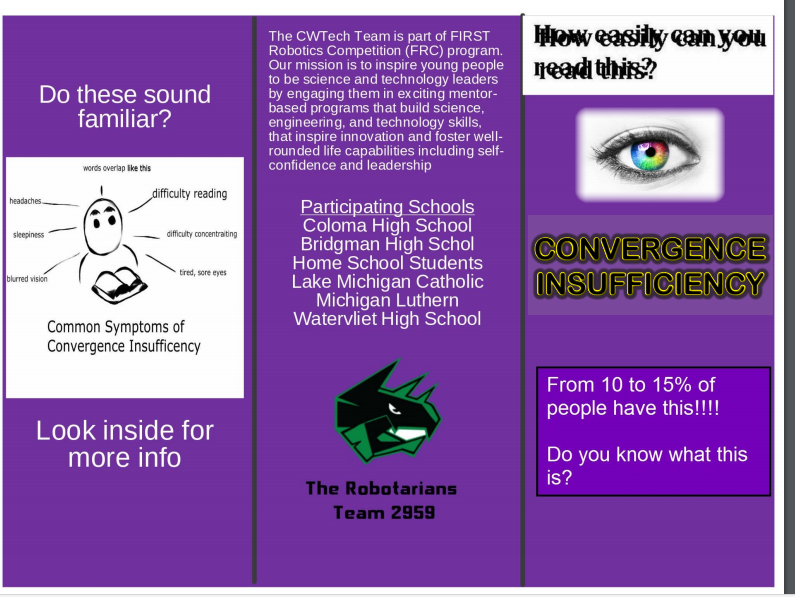 Here is their letter to public officials, school administrators, teachers and professionals:

Kudos for the great work by the CW Tech Robotarians Team #2959 in their campaign to bring public and professional awareness to end the needless struggle for those with Convergence Insufficiency! Your team is creating the ripple effect!

To understand this team and their passion take a look at their Team Video that won the 2016 Chairman’s District Award at Lake Superior State University:

And best wishes to the CW Tech Robotarians as they proceed to the FIRST Robotics District Competition at the St. Joseph High School Field House in St Joseph, Michigan on March 10-11, 2017.