The Importance of “Just Look”

“Just look”.  That’s an important message that our colleague, Dr. Glen “Bubba” Steele shares with fellow optometrists about assessing a variety of infant visual functions.  He has a gentle way of saying it, but at times it seems like an exhortation that should be followed by an exclamation mark: “Just look!”  Bubba has coined that phrase for retinoscopy, though the term can also encompass the preferential looking paradigm that has been used to judge infant visual acuity by Dobson, Teller, Mohindra, Held and others since the 1970s. 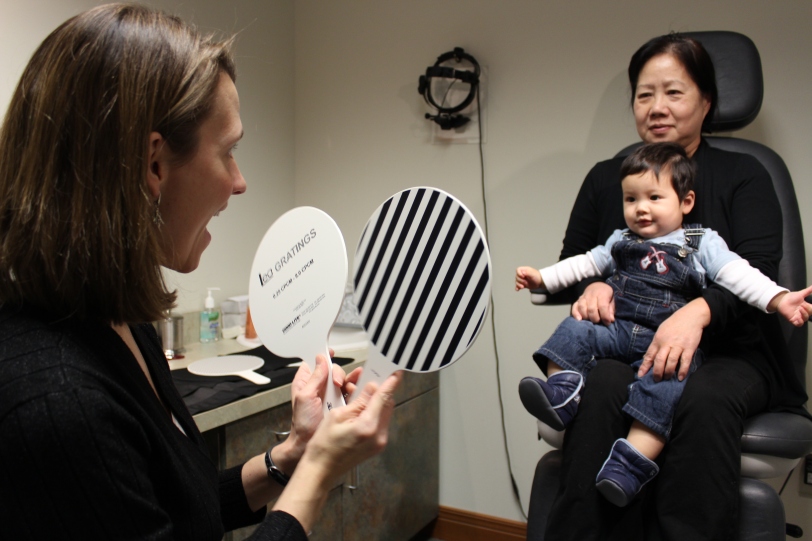 Bubba has been at the forefront of the InfantSEE program pioneered by Admiral W. David Sullins, O.D.  Dr. Jack Richman and I co-authored a paper reviewing important factors in assessing infants’ early looking patterns that has significant implications for eyecare practitioners undertaking infant visual assessments, particularly with regard to potential early biomarkers for Autism Spectrum Disorder.

These concepts have been bolstered by imaging studies, and it is now recognized that early patterns of eye gaze and brain connectivity initiate crucial developmental cascades in visual cognitive function.

A landmark article in the Journal of Neuroscience last year by Stjerna and colleagues cemented these “just look” concepts, demonstrable with newborns.   They extracted two items from the six item subsection called Orientation and Behavior in the standard Hammersmith Neonatal Neurological Examination scale. They selected items that gave a qualitative estimate of Visual Fixation (VF), using the following rating: 1 􏰀 will not respond to stimuli; 2 􏰀 looks but briefly; 3 􏰀 looks at stimuli but loses them; 4 􏰀 keeps interest in stimuli; and 5 􏰀 does not tire.  For Gaze Behavior (GB) they used the following rating: 1 􏰀 does not follow or focus on stimuli; 2 􏰀 stills, focuses, follows to side but loses stimuli; 3 􏰀 follows horizontally and vertically, but no head turn; 4 􏰀 follows horizontally and vertically and turns head; and 5 􏰀 follows in a circle .This was in response to a standard black and white bull’s eye target presented in front of infant’s face, moving first slowly horizontally, from side to side, then vertically, and finally in an arc. 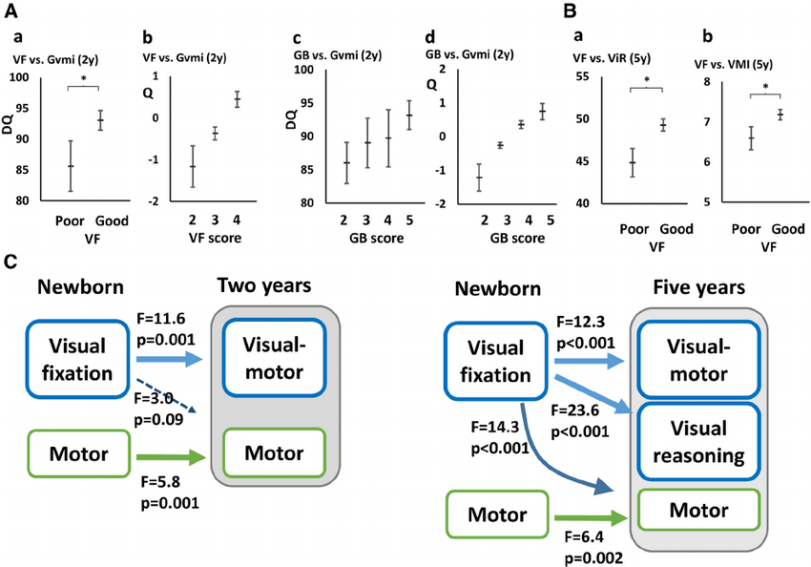 The results of this study support the notion that early neural networks for “just look” behavior, including visual fixation, operate as the fundamental core for later emerging higher cognitive functions essential for visual reasoning.

2 thoughts on “The Importance of “Just Look””