The Neurology of Eye Movements – Part 3: TBI and Cognitive Load

More on the pearls contained in Leigh & Zee’s 5th edition of The Neurology of Eye Movements, this one from page 965 covering only a column and one half, but consistent with the authors’ consideration of the behavioral component of eye movements. 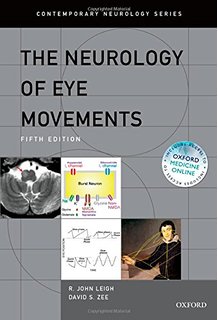 It comes in the context of their commentary about smooth pursuits:  “Smooth pursuit may be impaired in TBI patients, especially when combined with mental tasks.  Thus, if TBI patients are asked to remember several words prior to testing of smooth pursuit, their tracking performance deteriorates, thus reflecting limitations in coping with cognitive load … There is some evidence that training eye movements with tasks that require saccadic and vergence movements may improve visual symptoms.”

Leigh and Zee don’t elaborate on what they mean precisely by cognitive load.  In experimental psychology, load is typically  considered to be a progressive cognitive demand that places limits on the ability to process information in the presence of distractors.  Visual attention, and in some instances divided visual attention is part and parcel of the model.

There are three broad subtypes of cognitive load:

Consider a patient doing saccades to the beat of the metronome.  That is more of an extraneous load, and typically adds to the mental effort involved.  On the other hand, clapping one’s hands while executing saccades can often be a germane load because it is self-generated and can aid pacing and accuracy.

The example of mental effort cited by Leigh and Zee, remembering words prior to a pursuit task, represents an extraneous cognitive load.  While this may be difficulty for TBI patients to perform at the outset of therapy, it is important to progressively incorporate this type of cognitive loading into procedures, and to use the patient’s response as one index of the level of therapeutic rehabilitation.  Linguistic distractors, such as remembering or spelling words can be used.  Conducting basic math problems in one’s head, beginning with simple addition or subtraction can be done while tracking targets.  These strategies are familiar to those who work with children in applying cognitive load theory to learning.

For a variety of conditions noted throughout their book, Leigh & Zee stress the importance of memory-guided saccades.  The Sanet Visual Integrator Tachistoscope program is ideally suited for this, and adjusting the level of cognitive load to the patient’s capabilities at any point in time.  Numbers, letters, or words are flashed on the screen, and when the stimuli reappear in random order saccades must be made to locate them in the order in which they originally appeared. If the reverse mode is selected, the stimuli must then be touched in the reverse order in which they were displayed.  Additionally the stimulus can be presented either visually or verbally, with either modality capable of requiring a response in standard or reverse memory mode.  Leigh & Zee note that memory guided saccades typically show delayed latencies in response and are hypometric for patients with Parkinsonism, whereas patients with ASD (Autism Spectrum Disorder) show memory-guided saccades that are spatially inaccurate.  Patients with ABI on the other hand have relatively more difficulty with the anti-saccade procedure, as we reviewed in Part 2.

One thought on “The Neurology of Eye Movements – Part 3: TBI and Cognitive Load”