Is the Visual System Ultrafast in Autism?

From the December 4, 2014 issue of Nature, the International Weekly Journal of Science (p. 75): “However, imaging of ultrafast phenomena requires something extra special, and the applications of ultrafast imaging can be even more compelling than those of fast imaging.  The main breakthrough in this technology capitalized on the proven idea that, by moving the sensor lateral to the direction of imaging, a temporal signal could be captured spatially on the sensor.  In this way, time variations could be translated into spatial variations on the sensor.  This conversion from time to space could be done with a moving mirror, a film sequence or a moving sensor.”

You may recall a blog series I wrote about a nonverbal child with severe ASD last year, and that Christian was able to communicate second-hand that his visual system felt like it was a series of very fast camera speed shutter glances.  This alternative style of looking, this proclivity toward peripheral viewing, came flooding back to me as I read the article in Nature.  The concept I want to emphasize here is the ability of technology to capture temporal signals spatially in a way that far exceeds what the neurotypical visual system can process, but may ultimately provide more insight into how at least a subtype of children with ASD process visual information.

Among the most vexing issues in treating individuals on the spectrum is “the eye contact thing”.  As summarized on the COVD website, this may be part of a more generalized problem in integrating central and peripheral information.  It is good to bear in mind that while this style of looking may be disconcerting to us, it does not necessarily pose problems for the individual with ASD an in fact may confer certain advantages.  In terms of dealing with motion, that is certainly the case.  Consider for example the beauty in being able to sense the water molecules dissipating a water balloon bursts, captured in this ultrafast photography shot. 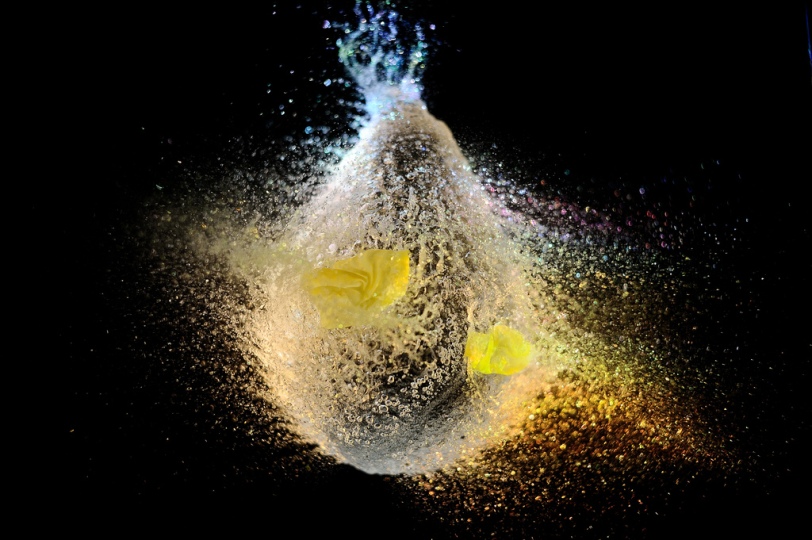 As you get about three-quarters of the way through this Salon article you’ll see a discussion about whether the visual styles of some individuals with ASD aren’t purposefully adaptive, or at least well-suited to some of their needs.  In one sense what we’re considering might be the analog of the argument that a low degree of myopia is not necessarily “bad” for someone immersed in central near point activities continuously.  And as an aside, consider for a moment how few of the children with ASD you encounter refract as having low myopia and what the implications for that might be – not to mention the aversion of many children on the spectrum to tolerate ophthalmic frames on their faces not just because of sensory sensitivity to the material (think clothing tags), but to the undesirable tradeoff between the visual borders of the frame and their exquisite use of unencumbered visual periphery.

6 thoughts on “Is the Visual System Ultrafast in Autism?”