In Part 1 I introduced you to Christian, a child on the Autistic Spectrum with an alternative visual style.  My basic contention is that children such as Christian operate with an inverted looking style, in which relatively peripheral visual functions become the predominant processing mode and central visual functions are used fleetingly.  For children who are considered to on the higher functioning end of the spectrum, there can be a sticky switch between central and peripheral visual functions.  At the core of these distinctions are signal to noise ratios.  The background for this approach was laid out in the review article on Vision in Autism Disorders by Simmons et al. (see in particular Section 13.2).

So consider this signal to noise problem as related to reading.  Here are two adjacent pages from the novel, The Book Thief.  Notice anything interesting?

It won’t catch your eyes as much as you track down the center of the left side of the page.  But as you move to the right side of the page, you may notice an interesting section of the lower left page capture your visual attention.  That is, if you’re very primed to be aware of visual patterns in the periphery.  For those of you who can’t see what I’m referring to, I’ll guide your eyes to the area, and then try it again on the image above.

In case your brain hasn’t picked up on what your eyes are taking in peripherally, look at the last three lines and note the parallelogram formed by He ran (line 1)/ straight enough (line 2)/ enough (line 3).  Adding to visual capture is the fact that the imaginary diagonal line that fills-in between these words on the left and right side, forming the edges of the virtual parallelogram, have the letters “gh” on the same slant in line 2 (straight) and line 3 (enough). 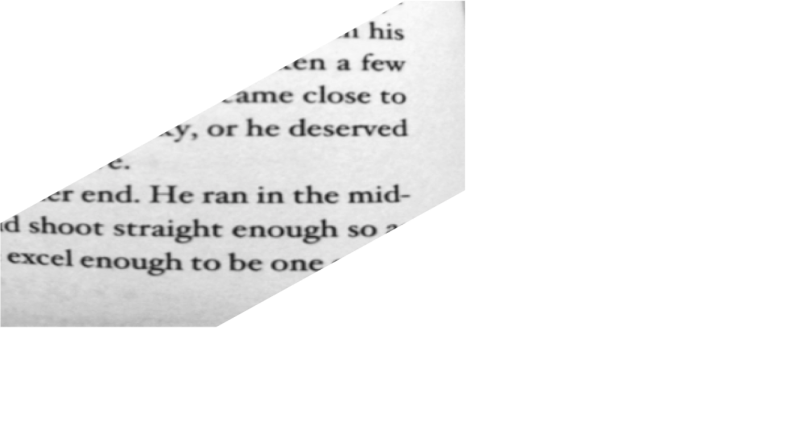 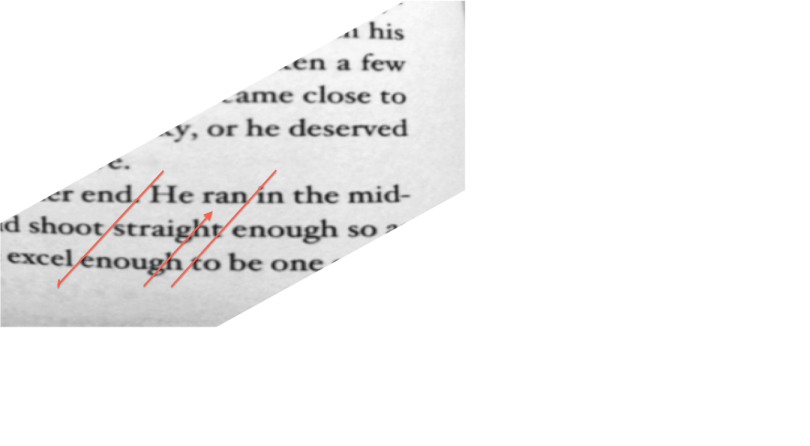 Christian might notice a pattern like this and become fixated on it.  I suspect for many individuals on the spectrum, such incidental patterns create a captivating sensory sensation that is stimulating enough to get stuck on at times.  At other times this may heighten a sensation of textual visual aliasing, a concept elaborated by Dr. Merrill Bowan, and serve as a deterrent to looking at crowded text pages.

There is evidence that young infants who will be identified as being on the autistic spectrum have inverted or reversed preferential looking patterns.  I am asserting here that this early form of an alternative visual style can carry  through as a lifelong preference for peripheral stimulation and patterns.  Understanding how individuals use this alternative visual style to their advantage has significant implications for how we assess and address their visual functions.

One thought on “Celebrate the Children: Alternative Visual Styles – Part 2”