Amblyopia – should occlusion therapy for Lazy Eye include a warning label?

Last week  Sarah successfully completed her treatment for her  Amblyopia- Lazy Eye. Sarah’s story began when she was first diagnosed with refractive amblyopia at age 5. Her first pair of glasses were prescribed and she did 2 years of occlusion therapy (patching) with little results other than the personal frustration she and her family were put through. The final straw was when her parents were told by two separate eye doctors that nothing more could be done to help her vision improve. Fortunately her parents found a new eye doctor who understood the cause of Amblyopia, who is current with the Advanced Amblyopia Treatment protocols and cared about Sarah’s binocular vision enough to refer her for office -based optometric binocular vision therapy. 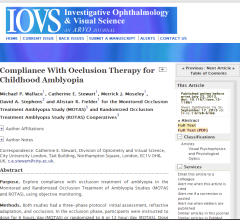 latest research, published in the September 2013 issue of Investigative Ophthalmology and Visual Science, entitled: Compliance with Occlusion Therapy for Childhood Amblyopia. In this study of 152 children with Amblyopia (average age 5.5), the “participants were instructed to dose for 6 hours/day (MOTAS) or randomized to 6 or 12 hour/day (ROTAS). Dose was monitored continuously using an occlusion dose monitor (ODM).” What was found from the study was, “This study shows that compliance with patching treatment averages less than 50% and is influenced by several factors. A greater understanding of these influences should improve treatment outcome.”

As has been stated in previous posts, occlusion therapy is the standard treatment for amblyopia and proven based on numerous studies to improve the monocular visual acuity in the patient when there is compliance. But there are two primary problems with occlusion therapy. First, because occlusion therapy does not treat the binocular vision dysfunction which caused of the amblyopia, when patching is applied as the only treatment,  the patient continues to function monocularly and usually with deficient depth perception and  second, occlusion therapy has many potential negative side effects. There are numerous studies that list the negative side effects and have been also published in medical journals. One notable study which paints a positive picture of occlusion therapy was published in November 2003 in Archives of Ophthalmology, entitled: Impact of Patching and Atropine Treatment on the Child and Family in the Amblyopia Treatment Study. In this study the PEDIG  investigators had 419 amblyopic children average age 5.2 and gave surveys to their parents. Even though the final “rosey” conclusion of the PEDIG investigators was that “the acceptance of the occlusion treatment (and Atropine) on the whole were positive indicating acceptance by both the parents and children”, when you looked at the percentages in each category, some red flags begin to clearly emerge. For example, the following were a sample of some of the responses in a variety of categories that could  be considered negative side effects or behaviors associated with occlusion therapy:

As stated in previous posts, it is not to suggest that occlusion therapy (or Atropine – penalization) does not result in improvement in monocular visual acuity. It is similar to a generic medication that may have been shown to be effective in years past, but like so many advancements in the management of disease conditions, the old medication may have negative side effects and limitations. In the case of amblyopia, occlusion therapy comes with a host of potential negative side effects and is limited in scope because it does not treat the binocular vision dysfunction that causes of the amblyopia. Which raises the question…should occlusion therapy include a warning label?