For sustained stereo viewing we know that stereoscopic 3D (S3D) displays presents a de-coupling of accommodation and convergence, as depicted in this graphic from Marty Banks and his group in California. 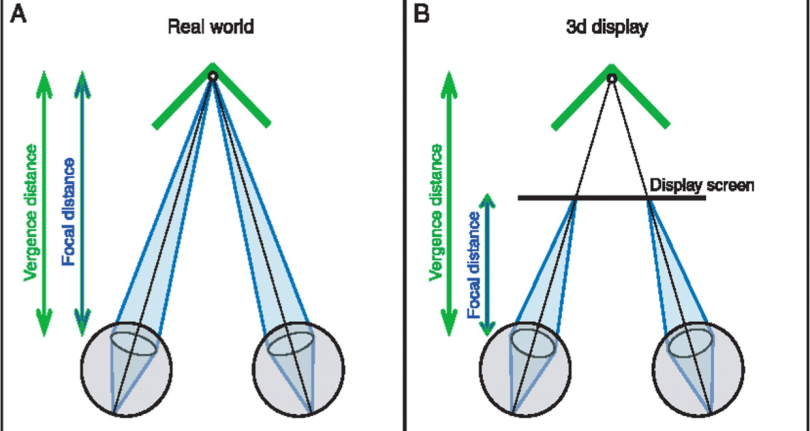 Our panel tomorrow at the COVD meeting will focus on two general categories of S3D viewing, ones that are relatively static or stationary, and ones that are dynamic.  For simplicity, let’s call the static effects ocular or physiological cues, in contrast with the dynamic cues which are kinetic effects.  When the target is static your brain has a chance to adjust, and sort out this mismatch between where your eyes are meeting and where the point of clarity is for the viewing distance.  This is the case when you’re looking at a stereo picture, or a learning display where you can take the time to adjust – almost like your brain is operating an S3D camera on manual focus.  With dynamic displays – the basis for gaming, movies, and learning videos, your brain will have to continually adjust in concert with your eyes.

The dynamic factors primarily involved are motion parallax, optic flow, kinetic depth effects, and interocular velocity differences.  Let’s take one common example of a target many of us use in vision therapy: eccentric circles (ECs). 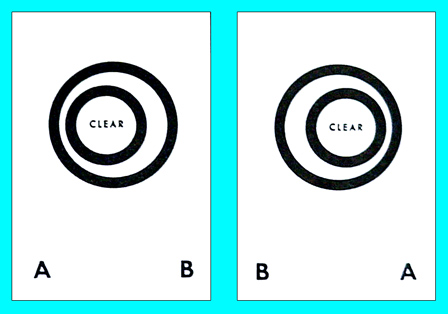 Knowing where to direct your eyes to look in order to either look closer than the plane of the targets to get the S3D image of the third set of circles in the center, or to look beyond is a big enough deal in itself.  To be able to hold on to the S3D view while the target is in motion is an entirely different demand and for most people more challenging at first.  For people with visual motion hypersensitivity, even more so!  So we follow a progression with ECs where we first guide the patient to fuse ECs with a visually quiet, uncluttered background, preferably while seated.  A blank lightly colored wall or blue sky is perfect.  When the stereo effect is stable, now start to slowly trombone the target in and out.  When you can do this and hold on to depth and clarity, circle the targets in a tight arc, gradually expanding the arc.  When you can do this, progress to a visual background that has a little bit of clutter.  That will make it more challenging to localize where the circles are in space.  And as you re-introduce movement of the target, the optic flow of the background will ramp up visual motion sensitivity.

In the therapy room we have you stand up, move around, work with S3D targets on balance boards, using lenses and prisms, all to create what we call significant degrees of freedom between both accommodation and vergence, and between ocular and postural effects.  Ever wonder where that term came from?  Though behavioral and developmental optometrists associate it with Skeffington, he was heavily influenced by the neurologist Kurt Goldstein.  Degrees of freedom is an engineering term, and it’s striking when you look at constitutive models of engineering how many familiar terms there are including stress, strain, load, plasticity and so forth.

So when you view a movie you have variable S3D effects.  It’s as if you’re taking the ECs and varying their separation while managing the kinetic effects including variable optic flow as the complexity of the background keeps changing.  What a three ring visual circus!  How do we simulate these effects in VT?  More on that in my presentation as part of tomorrow’s panel discussion.