For Derek’s Mom: A Primer on Amblyopia ex Ophthalmologia

Most people are aware of the condition known as amblyopia, commonly referred to as “lazy eye”.  Less well known is that there are different types of amblyopia, such as anisometropic amblyopia, in which the two eyes have significanlty different refractive powers, and amblyopia ex anopsia, in which the brain is deprived of good vision through one eye due to a disturbance such as corneal clouding or cataract present in that eye at birth.

Derek is a young boy who was found to have ambloypia that escaped detection by his pediarician.  It first surfaced on a screening by the school nurse.  A local optometrist confirmed the Derek was much more farsighted in one eye than the other, and he was referred to me for treatment.  Mother did her research, and she learned that wearing glasses and patching the better eye is an antiquated way of treating amblyopia. 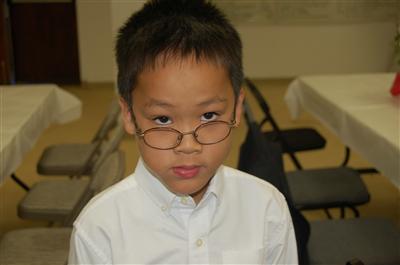 To preserve patient confidentiality I will not show you a picture of Derek.  This image in the Google library shows what typically happens when a child Derek’s age sees fine out of one eye without glasses.  He tends to slide the glases down his nose a little so he can see over them.  Even when the glasses are repeatedly re-adjusted, they magically find their way down the nose a bit.  We know that wearing the glasses full time is a very important component of improving vision through the amblypopic eye.  When a child peeks over the glasses, the benefit of the lens power is lost.

It made alot of sense to Derek’s mother at the outset that we were going to pursue an aggressive approach to improving vision through the amblyopic eye, and insuring that both eyes work together optimally as a team.  We’re now midway through his therapy program and he is doing well, but yesterday as I was finishing his progress evaluation and summarizing his improvement, his mother asked me if she could discuss something that was beginning to concern her.  I said sure, and the question she raised is one that I’ve heard dozens of times before:

How come pediatricians and opthalmologists say such negative things about vision therapy?  It’s starting to bother me, because people I discuss this with ask their pediatrician or ophthalmologist and they get negative opinions too.

I turned toward Shelly, one of our vision therapists who has been working with Derek and who was sitting in the progress evaluation, and asked her to answer the question.  Quite to the point, Shelly observed that those who say negative things really don’t seem to be aware of the latest developments in the field.  Their notion of the applciations of therapy are very antiquated.  Even when gold standard scientifc studies come out regarding vision therapy, such as the CITT, pediatric ophthamology is very slow to implement change.  For a very detailed exchange on the subject, read this post and the comments that follow.

So here is a neologism that I’ve coined to describe the confusion that parents like Derek’s mom experiences when she recommends therapy to acquaintances, and they question her about the negative opinions they’ve received even without the child having been evaluated:  Amblyopia ex ophthalmologia.  It certainly doesn’t apply to all pediatricians and ophthalmologists.  Take a look for example at the compilation of MD insights on the COVD website. It applies only to those physicians who dismiss the benefits of optometric vision therapy due to willful or unitended ignorance. Together we can change the negative things that we can’t ignore.

2 thoughts on “For Derek’s Mom: A Primer on Amblyopia ex Ophthalmologia”