I’ve always loved the title of this paper: “The Magician’s Forceps Phenomenon in Exotropia Under General Anesthesia“.  With its language rich in imagery of the master eye (straight) and slave eye (strabismic) the article conjures Eye Dreams of Jeannie but the title itself alludes to an intriguing phenomenon that demonstrates the role of proprioception in eye muscles on eye position.  The basic concept is laid out in the original article on proprioception and exodeviations in which the abstract sets the stage:

“When a slight adductive force is applied by forceps to the straight or master eye in exotropia, the exodeviated or slave eye assumes the straight position. The nature of this phenomenon was studied. The reflex occurred in an all-or-none form and showed little dose response, that is, the slave eye did not adduct beyond the straight position even if an extreme forced adduction was applied to the master eye. Once the slave eye assumed the straight position by the reflex it maintained this position, even when the master eye was covered, except when the master eye was released from the forced adduction. This reflex movement response occurred promptly on repeated forced adduction at 9 Hz on the master eye, while the visual movement of the eye was limited to follow 1 Hz movement of the target. The reflex occurred readily in the light but hardly at all in the dark. From these facts the authors conclude that the reflex is brought about as a result of interaction between the proprioceptive impulse and the visual input, where the former may chiefly constitute the signal, while the latter restricts the threshold of the reflex pathway.”

Here are photos from the original article to illustrate what’s happening.  In this instance the left eye is exotropic, and the examiner is stimulating the medial rectus of the right eye with forceps to adduct or move the eye inward.  The left eye responds by moving inward just enough to maintain a straight-ahead position.  Here’s the intriguing point: The amount that the right eye is forced inward doesn’t influence the position of the left exotropic eye once it has straightened.  This argues against the repositioning of left eye alignment as being a local eye muscle response due to Hering’s Law of yoked muscle forces, and more in favor of a centrally mediated signal to reflex alignment as Helmholtz envisioned.  (We hinted at this in the three-part blog just concluded.)

Below is an example showing that even when the normally straight eye is covered, proprioceptive input to the left exotropic eye maintains that alignment.  Another intriguing observation, in the author’s words:  Once the straight eye position is attained, the left eye did not return to the original exodeviated position when the master eye was covered, unless the master eye was released from the forceps, regardless of whether the vision of the slave eye was good or not. 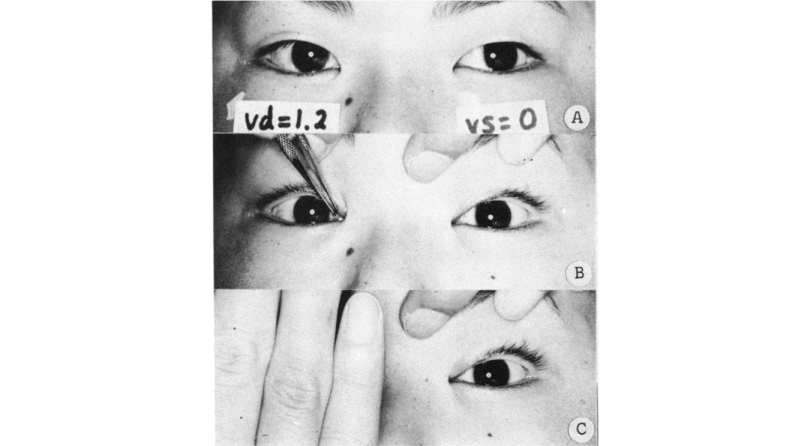 The authors conclude:  “All of these findings can be explained if it is assumed that in cases of exodeviation an abnormal proprioceptive impulse persists that originates from the master eye to cause abnormal contraction of the slave eye lateral rectus, and that the forceps phenomenon is the result of cancellation of this abnormal standing impulse of proprioception.”

How might this apply to strabismus therapy?  Stay tuned for Part 2.