In Part 1 we re-visited Albert Darwin Ruedemann, Jr., M.D., who founded the Kresge Eye Institute at Wayne State University College of Medicine in Detroit, Michigan in the 1940s.  Dr. Ruedemann’s concepts make it very clear that binocular coordination is a learned concept, an underpinning of optometric vision therapy that is all but lost in contemporary ophthalmology.  Ironically a re-awakening of this awareness may occur at the Kresge, but more likely through its Department of Otolaryngology rather than its Department of Ophthalmology.  I suggest this because of the work of W. Michael King, Ph.D., Director of the Vestibular and Oculomotor Laboratory at the Kresge Hearing Research Institute in Detroit. 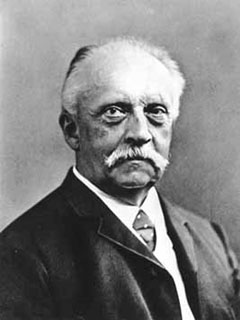 Recognize this man?  Bonus points if you do, but to most he’s a name much more than a face and your only clue is that he is credited for the invention of both ophthalmoscopy and ophthalmometry.  That’s right – he’s Hermann Ludwig Ferdinand von Helmholtz, M.D., and applying his insights to vision may hold the key to understanding why so many of the patients we see are under-served by Helmholtz’s 21st century contemporaries.  I suggest this because of a letter to Nature co-authored by Dr. King prior to his arrival at Kresge in which he wrote: 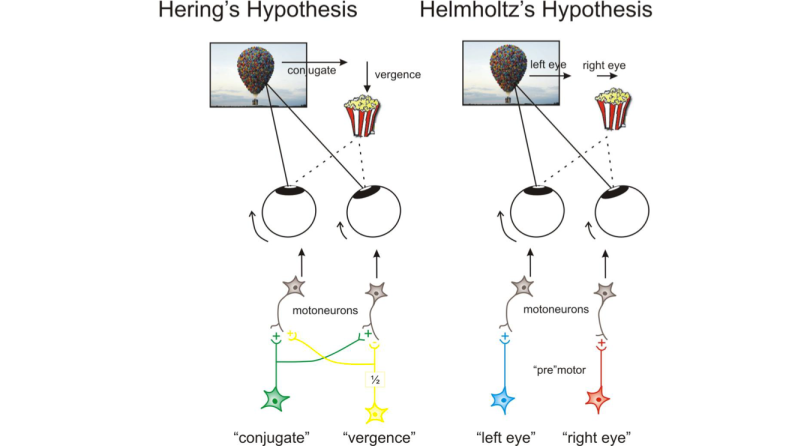 The figure above, illustrating the essential difference between Hering and Helmholtz’s theories, is from a gorgeous 2010 Ph.D. Thesis at the Aerospace Medical Research Unit of McGill University, so in a way it might be conceived as rocket science. It supports King’s point that a possible cause of strabismus is a failure of the eye movement system to develop appropriate binocular coordination mechanisms during infancy, while the cortex is maturing and motor learning between the two eyes and the rest of the body is maturing.

I’ll have more to say in Part 3 about re-discovering Helmholtzian understanding of binocular vision as a learned, coordination process, but in the interim don’t forget the motor city …

6 thoughts on “Motor Learning in the Motor City – Part 2”