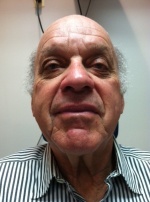 Here’s George.  You might call him a geriatric patient because of his age, but he is spry and his sense of humor hasn’t lost a beat.  Yet over the past few years he’s been progressively bothered by double vision.  His optometrist referred George to me because he was already up to 12^ base out in his glasses with 2^ vertical, with no end in sight to chasing prism.  I’m not opposed to prism, by any means, though I view it as a support that positions a patient to succeed more readily in undertaking active therapeutic procedures.  As you can see, when George is asked to fixate a distance target or read the acuity chart, he adopts a position with his chin upward, allowing him to maintain his eyes in a relatively downward position.

As it turns out, or perhaps more appropriately as it turns in, George has an “A” pattern esotropia.  I couldn’t find a convenient graphic of one, so I inverted this web image of a “V” pattern eso.  The “A” is derived as a simple way of describing that the inward drift is greater in superior gaze as compared to either primary or inferior gaze.  George’s non-comitancy isn’t of sufficient cosmetic magnitude to show up photographically, but it is clear that he maintain his chin up posture because his best position of fusion, or least eso, is with his eyes looking downward.

George has made really nice strides in gaining fusion without the need for prism.  As I reviewed his progress with him, our Resident, and a new extern, he was highly appreciative of the gains made thus far in vision therapy.  He has bolstered divergence as well as vertical fusion ranges, and developed greater peripheral awareness in the lateral field.   “I have to tell you that when I started therapy I was skeptical”.  “That’s fine, George” I told him.  “Before you were a healthy skeptic and now you’re simply healthy.”  We all agreed that success in vision therapy is very much a function of the extent to which a patient meaningfully participates.

There were a few other issues we talked about, now that we’re mid-way through George’s therapy program.  Delighted that he can now walk around without glasses, he was thinking of getting a bilateral lid tuck.  It’s possible that because he was walking around with his chin up so regularly for the past few years, George’s bilateral ptosis was partly functional.  Or it may have been purely mechanical due to aponeurosis or dehiscence of the levator muscles.

Here’s the visual field of a patient with significant ptosis causing an artifactual loss of the superior visual field.  When George mentioned that he was thinking of “having his lids done”, I asked him if experienced dry eye symptoms and he said that he did, indeed, and was loading up on fish oils.  We briefly discussed the potential risk of blepharoplasty, or a lid tuck, in exacerbating dry eye symptoms.  While Medicare would pay for the procedure with documentation of what a repeat fields with his lids taped up would do to increase the visual field, George now has something else to ponder.