This is Philadelphia Flyers’ captain Chris Pronger.  Note his hockey helmet, which affords no eye protection.  As reported on Philly.com, after taking an inadvertent stick to the eye and missing six games, Pronger returned to the ice.  But he played only five games and was shut down again due to lingering headaches.  Initially the Flyers said he was suffering from a virus, but 18 days later they concluded that he had concussion-like symptoms.

Dr. Doug Smith, Director of the University of Pennsylvania’s Center for Brain Injury and Repair, said he has no doubt that the blow to Pronger’s eye could cause a concussion.  You may recall from a previous blog post that U. of P. was the origin of the paper showing that visual processing speed in the form of saccades was impaired in concussion.  The club announced that Pronger was going to visit specialists in Pittsburgh tomorrow, most likely Lovell and colleagues who we featured in Part 1 of our discussion on concussions. 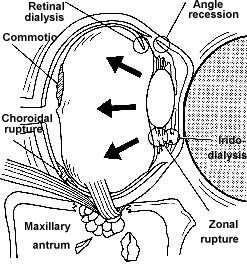 So here’s the deal.  We’re used to thinking of eye trauma in terms of lacerations, ruptures, shearing, edema and so forth.  In other words, visible damage to the contents of the eye, to the orbit which contains it, or to the eyelids.  But if we believe that the eye is actually an extension of the brain, as we do with regard to visual processing according to the AOA, then it should be no surprise that an injury such as Pronger sustained with a blow to the eye concussed him.  What Dr. Smith is saying, in essence, is that eye trauma is brain trauma, whether or not the eye is visibly damaged.