The Curiosities of Quanta and Quale

In a previous post about stereopsis we noted that although we speak about depth perception and binocular vision in three principal vectors of space, there are many other angles at which one can subdivide space – in essence, there are more than three dimensions.  Quite quantam mechanical, in theory. 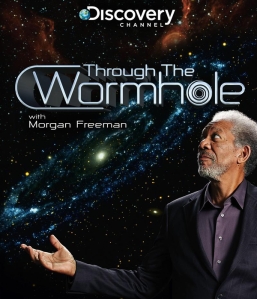 Morgan Freeman hosts a TV show on the Discovery science channel called Through the Wormhole.  That explores questions about the universe, and one of the current topics begs the question about how many dimensions there are of space.  Susan R. Barry, Ph.D. has addressed the topic of stereopsis and 3D vision widely over the past few years, and she is featured during the opening segment of the show.  You can view the schedule for when the show is airing over the next week here.   Although I don’t have a link yet for the video, many thanks to Dr. Dan Press who DVR’d the first showing of it for me.  Sue does a marvelous job, as always!

Though I don’t have a link to the video yet, here is a promo trailer for Through the Wormhole that gives you an inkling of the quality of the shows. 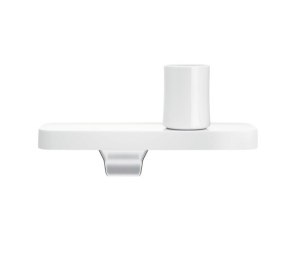 As Doctor Dan and I were watching the show, and Sue was video-graphically describing what she meant by a sense of palpable space between objects, I noticed a wall mounted shelf next to the TV.  It reminded me of a shelf I used to have in my office positioned with a cup directly under a holographic image of water coming out of a faucet.  We set a halogen light on the image so that the water looked like it was running out the faucet into the cup.  It was so spellbinding that whenever someone passed by for the first time they froze in their tracks, marveling at the dimensionality.

It struck me at that moment that although binocular stereopsis is a quale, and therefore by definition a very personal form of a perceptual experience, a way of sharing that experience with others might be to get a sense of the construction of depth that holography provides.  Although that may not do full justice to the sense of emergence of this “palpable space”, it may at least provide some clue as to how an individual is able to enter into 3D-ness or “depthiness”, as  Greg Voth is fond of calling it. 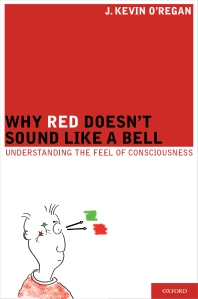 Strabby, one of my favorite bloggers, wrote about the quale of stereopsis yesterday.  About how she is stuck in transitioning from the glimpses of float in 3D constructed through binocular disparity targets in the therapy room, and the actuality of 3D in everyday situations. Strabby ruminates:  “Is ‘float’ every waking moment of every day for everyone with 3D vision? Float, float, float, all day long, with your car keys and your mailbox and your microwave oven door opening towards you and the socks in your drawer and the stapler stapling? Probably.  But I can’t really imagine it, because it’s a quale.  Wikipedia also says ‘red is a quale…how do you explain ‘red’?”  That’s a great question, and though we don’t explain red to each other by describing it as a wavelength  in the 670-770 nanometer band of visible light, there’s a reason why red doesn’t sound like a bell.  Rather, we tend to describe visible quale by the objects or properties we associate with it. 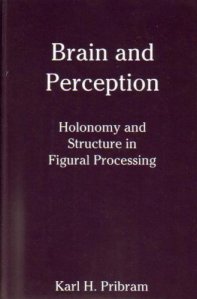 Karl Pribram, noted neuroscientist, helps us get a bit closer to what Strabby is looking for in his book on Brain and Perception.  Though it’s been 20 years since the book came out, it was the epiphany I got out of reading it that led me to mount the holographic image of the running water into a cup resting on an acrylic shelf in the reception area of my office.  A paper out of VCU provides a nice synopsis of Pribram’s ideas, as does a popularized version through The Holographic Universe.  There are many things about holographic principles that are fascinating including the fact that the inventor of the hologram was Dennis Gabor. Fascinating because the use of Gabor patches has become ubiquitous in vision science research in the study of amblyopia.

If Pribram is correct, the brain uses holographic or holomomic principles to construct visual space.  The following video on the holographic universe gives a glimpse into how sight informs us of our external world (beginning at about 3 minutes in) and notes (at about 8 1/2 minutes in) that the distance between you and this screen is nothing but a feeling of space formed in your brain.

T0 the extent that this is true, we can arrange conditions to help recalibrate visual space.  Prism can provide a vector and, under certain conditions, multiple vectors.  A stereogram or vectogram depending on the nature of its disparity and how we localize it relative to us and other objects changes the feeling of space.  Being more peripherally aware while engaged in a central task can change visual projection.

It is quite a process for a patient to gradually have one foot inside the monocular perception of depth and one foot inside the binocular world of depth, tapping into the phases of stereoscopic perceptual emergence that I mentioned previously.  Consider, as a construct, the work of the sidewalk artist  Julian Beever.

Beever is suppressing the sense of space normally afforded by binocular vision.  By visualizing, sketching, then literally throwing down boundaries, and repeatedly looking through a monocular lens to gauge crafts a 2D simulation of 3D space.  Why is the camera view crucial?  Because, in Beever’s words, the camera limits the brain’s ability to judge distance.  It makes you use only one eye, and therefore you can make the brain believe stuff that it otherwise wouldn’t believe.  In essence, Beever has reverse-engineered the process by which the brain builds the quale of stereopsis.