The product warning from Nintendo regarding its new 3D hand held video game system made big news last week, prominently as a front page article in The Wall Street Journal on December 31, 2010 and a variety of website releases.

The WSJ article points out that unlike movie theaters and most high-end TV sets on the market today, the Nintendo 3DS is expected to be among the first mainstream products to deliver 3-D images to viewers without requiring them to wear specialized glasses.   This is welcome news, because it takes the focus away from issues relating to the technology or comfort of 3D glasses, and places it squarely on the  stereoscopic 3-D (S3D) viewing experience itself.

Why did the Nintendo information create such interest in the media?  Let’s look at the consumer product warning itself:

The way 3-D images appear varies among individuals. Please be aware there could be times when some images cannot be recognized as 3-D depending on physical conditions, types of video pictures, surrounding conditions and so on.

If you are exhausted or not feeling well, please refrain from playing. Also, when you start feeling ill, stop playing immediately.

Watching 3-D images for an extended time could result in adverse effect on eyesight development in the case of children 6 years old and under, therefore we highly recommend a switch to 2-D display.

Well the idea of switching from a 3DS display to a 2D display isn’t new.  The entertainment industry is aware of the discomfort that some people can experience when watching S3D, hence current 3D movies are made with a 2D version as an alternative.   So what’s with all the fuss about S3D viewing potentially harming children the visual development of children six years old and younger?

The simple fact is that we don’t really have good evidence yet as to what the impact of  prolonged viewing of S3D will be on the development of a child’s visual system.  Beginning with studies at the Pennsylvania College of Optometry, evidence to date seems to pinpoint adult-like stereoscopic development by six years of age.  Exercising caution until we know more about these effects seems prudent, and Nintendo is not the first company to do this.  Sony has previously issued warnings about the potential effects of viewing 3D TV and 3D video games on the visual development of children under six years of age. 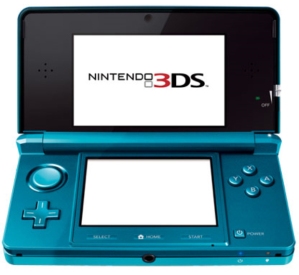 Nintendo’s 3DS is an impressive little gadget.  It incorporates a slider so that the extent of the S3D can be adjusted on a continuum from full binocular stereoscopic viewing to a mild stereoscopic viewing demand.  Or, you can elect to turn the S3D effect off entirely.  This not only allows for parental control, but has implications for optometric vision therapy that we’ll discuss elsewhere.  It also has multiple camera lenses built in to the device, allowing it to serve as a 3D camera.  Here’s a nice introductory video piece about it.